There are two primary types of polyurethane spray foams, known as open cell and closed cell. They differ in densities and other aspects that can be beneficial or detrimental in a given application.

What Does Open Cell and Closed Cell Mean?

In open cell foam, a majority of the millions of bubbles share walls with one another, thus making it soft and airy. Only a few percent of the finished product is plastic and the rest is mostly carbon dioxide trapped within the structure. These foams typically are light and only weight .5-.6 pounds per cubic foot. The general definition in the industry for open cell foam is that greater than 50% of the cells are open.

Closed cell foam forms in a similar manner, but a majority of the cells in closed cell foam are independent from the other cells in that they have their own cell structure and do not share any of their structure with other cells. The resulting foam has a much higher plastic content and less air/gas content. The foam is strong and rigid and typically weighs in the 1.7-2.0 pound per cubic foot range. The general definition in the industry for closed cell foam is that greater than 90% of the cells are closed.

First, we will look at Open Cell Spray Foam. Open cell foam is pretty soft, a little bit like a cushion. The cell walls of this material are slightly broken and air will be able fill all the spaces. When open cell foam is applied, it will expand rapidly to about 100 times its original applied thickness. This allows it to reach all those nooks and crannies and areas that are hard to reach, this can include ceilings, walls, joist ends and other air infiltration prone areas. Thanks to its fast expansion and coverage, it will seal the area and therefore allow proper insulation. Open spray foam does not provide water resistance and its low strength provides much less support to the walls. Open cell foam is usually limited to interior use. Its Standard R-value is about 3.8 per a inch of thickness, but its Effective R-Value is about 7.2 per inch of thickness. The biggest
benefit of open cell vs closed cell is the fact that it is allot easier to work with and it is allot cheaper to apply. Usually Open cell can be up to 60% cheaper than closed cell. Due to the fact that open cell spray foam is not a vapor barrier it is best used in low humidity parts of the
country or with home that has a separate vapor barrier installed. 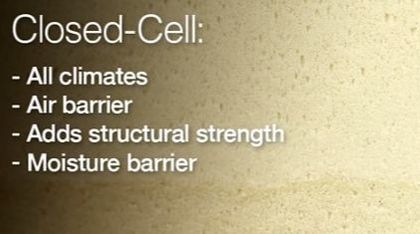 Closed Cell Polyurethane Spray Foam
Closed cell foams are also dense enough to insulate air, preventing drafts and keeping in regulated temperatures. This density also prevents mold growth because temperature control can cut down on humidity, which spawns mold. In order to maintain their resistance, closed cell foams are usually dense and strong, and resemble solids when they fully form. This strength not only helps to insulate buildings and appliances, but can also strengthen walls to which it is applied.

​
Closed Cell Spray Foam is strong enough to walk on without to much distortion. In closed cell foam, the cells (or bubbles) are not broken this makes it much stronger and rigid because the bubbles in this material are so strong that they can take a lot of pressure. These cells (or bubbles) are full of a special type non-toxic gas that makes this insulation have the highest insulation value possible. Closed cell foam has a much higher density than open cell foam which provides superior insulation & sealing of both vapor and air. This added vapor barrier function is highly valuable especially in high humidity areas due to the fact that it can function as a highly effective primary vapor barrier, this in-turn can help eliminate mold growth in your home. Also unlike open cell, closed cell foam can be used externally to insulate outside structures. Another interesting fact about closed cell spray foam is some studies have shown that when applied on structures it can add up to 30% strength due to its rigidity and stickiness. It truly is an amazing product.